A nonbeliever's SECOND reading of the Bible 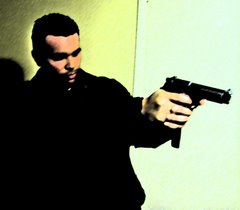 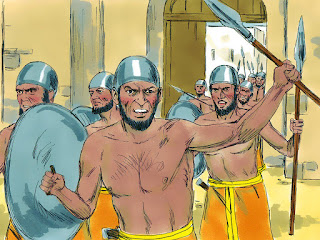 A Nonbeliever's SECOND Reading of the Bible

2 Samuel 10 - I like a good war novel on occasion.  One of my favorite books is The Killer Angels by Michael Shaara.  What distinguishes that story from these historical texts in the Bible is a coherent plot, along with the familiarity of a culture that I am only 150 or so years removed.  When reading Biblical texts, I am reading stories of people who had no qualms about genocide, who existed at a time thousands of years before modern science and the Enlightenment, and who were essentially of the Bronze Age.

I am, however, thankful that those who were around at the time wrote these texts down, as it does give an interesting insight to how these people think and what they did. This makes it interesting from an anthropological point of view, and even a philosophical one.

Well, the strategy apparently worked quite well. As soon as the Syrians saw Joab, they ran.  And as soon as the Ammonites saw the Syrians flee, they also broke and ran and fled into their city.

Upon hearing of Joab's success, David then gathered all of Jerusalem and went to war against the Syrians, and just slaughtered them - apprently taking out 700 chariots and 40,000 horsemen.

There's also a strange account in the beginning of the chapter where David said he will show kindness to Hanun, son of Nahash, because Hanun had showed David kindness before.  But the only other account where we come across Hanun and David is when Hanun either threatened to or actually gouged out the eyes of David's messengers (1 Samuel 11).

In response to this David's kind gesture, Hanun shaved off half of their beards and cut their garments up to their ass.  This shaming of David's messengers is what eventually led to the battle described above.
Posted by Andy at 11:34 AM 0 comments 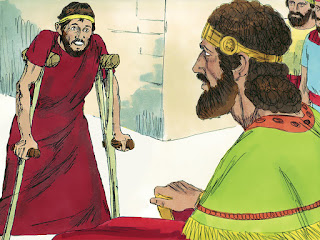 A Nonbeliever's Second Reading of the Bible

2 Samuel, Chapter 9 - If you recall previous entries, the Philistines defeated King Saul and grandson Jonathan at the Battle of Mt. Gilboa.  Well, King Saul's last descendant was a man named Mephibosheth, who was the son of Jonathan. Mephibosheth was basically the grandson of Saul.  In their attempt to flee for their lives, the young child's nurse accidentally dropped Mephibosheth and he broke both of his legs.

Mephibosheth fell on his face when he met David, and David, out of kindness and in the spirit of victory, gave Mephibosheth all the properties and titles of the House of Saul, thereby reinstating him as royalty.

There wasn't anything to terrible about this particular chapter.  It is a straightforward account of King David trying to fix the perceived wrongs of the past.

Sorry about the long time with no posts.  It has been an interesting few years since I last made an entry in this blog.  I plan to continue this particular series and also write a lot of other things.
Posted by Andy at 8:49 AM 0 comments

King David slaughters and loots from his enemies

King David massacres the Philistines and the Moabites.  Image from BibleStudyOutlines.org

2 Samuel, Chapter 8 - This chapter again reiterates King David's ongoing slaughter of the Philistines and Moabites.  One interesting piece of data is his maiming of captured horses, after securing 1000 chariots and 700 horsemen.

It also should be noted that those 700 horsemen is a disputed number, because in 1 Chronicles 18:4, it says David actually took 7,000 horsemen.  Maybe it's a recording error, but that just goes to show the problems inherent to these ancient documents.

From all his conquests, he gathered plenty of loot, including the golden shields of the servants of Hadadezar.

So, way to go David!  At this point of the Bible, he's really kicking ass!
Posted by Andy at 9:49 AM 0 comments

2 Samuel Chapter 7 - The gist of Chapter 7 is this - David, if you build me a temple and your kingdom will last forever.  Thousands of years of later, we know this is not true.  I know that metaphorically people can say that it is still in existence, but that explanation doesn't fly well.  In fact, that's not the only promise that was broken here.

Here's a list of some of the promises spoken by Yahweh (the God of the Bible), via a prophet named Nathan, to David.

2.  "I will establish a permanent place for the people of Israel, and the "children of wickedness" (presumably other nations) will no longer bother them." (7:10)  We know this isn't true at all.

3.  "When your days are fulfilled, and you sleep with your fathers, I will set up thy seed after thee, which shall proceed out of thy bowels, and I will establish his kingdom." (7:12)  Okay.  That was just weird.
Posted by Andy at 8:49 AM 0 comments

Uzzah tries to keep the ark steady because the oxen shook it.  For this, God smites him.  From ldsseminary

2 Samuel, Chapter 6 - This is kind of a weird chapter.  It starts off with David gathering 30,000 Israelites and marching off with the Ark of the Covenant.  The ark was in a brand new cart and was driven by two individuals, Uzzah and Ahio.

At a particular part of the road, known as Nachon's Threshingfloor, the ark began to shake because of the oxen.  Uzzah tries to steady the ark so it doesn't fall and ZAP!  God kills him.  It says God killed Uzzah "for his error".  I guess the error may have been the placement of his hands?

King David started to fear the Ark of the Covenant, and didn't want to bring it into his city.  Instead, he left it at some guy named Obededom the Gittite.  Obededom actually capitalized off this, because in the three months that Obededom possessed the Ark, God blessed him and his family.

After hearing that Obededom was being blessed, David sent for the Ark to enter into the city of David.  To honor the entrance of the ark, David sacrificed "oxen and fatlings".  Fatlings!!!  I had to look that up in the dictionary.  A fatling is a young animal that was fattened for slaughter, perhaps similar to veal?

What happens next is even more bizarre.  Apparently, as the Ark is being brought into the city, David was dancing and I think his junk must have been hanging out!  Michal, the daughter of the previous King Saul, looked out the window and saw him.  Later, when she met David, she said, "How glorious was the king of Israel today, who uncovered himself today in the eyes of the handmaids of his servants, as one of the vain fellows shamelessly uncovers himself!"

David replies with what seems like a taunt, "God chose me before your father, and before all his house, to appoint me over all the people, over Israel, so I will dance and play before the Lord."

His last retort before the end of the chapter, "I will be more vile than this, and will be base in mine own sight: and of the maidservants which thou has spoken of, I will have them in honor."

And then, for no apparent reason, the chapter ends like this:  Therefore, Michal the daughter of Saul had no child until the day of her death.
Posted by Andy at 9:07 AM 0 comments

While waiting in the mulberry trees, King David and his troops awaits the sound of God
moving through the trees before advancing upon the hapless Philistines.
Image from the Jim Bakker Show Blog

2 Samuel, Chapter 5 - This chapter is about King David rousing his troops and the subsequent assaults and victories on the Jebusites and the Philistines, along with some of the repression done by the Israelites to keep these people in line.

It starts off with some grumbling from the Jebusites, who are not a fan of David and don't want him around.  So, David takes the Jebusite stronghold of Zion, which becomes the City of David.  He rallies the people to his cause, saying in the eighth verse: "Whoever gets out of the gutter and kills the Jebusites, and the lame and blind whom I hate, that person shall be made a captain (in the army)."

As King David established his kingdom and it grew, David gathers more wives and concubines.  In other words, David has his own harem!  It doesn't say how many, but they started getting pregnant real quick.

However, more Philistines came and once again camped in the valley.  So, God lets David in on a bit of strategy.  He advises David and his troops to go around the Philistine encampment into a grove of mulberry trees, there to await "the sound of a going" in the tops of the mulberry trees (5:23).  David follows the advice and waits patiently until indeed a rustling was heard in the trees.  He gave the orders to advance upon the Philistines and left death in his wake.
Posted by Andy at 9:58 AM 0 comments

Above: Rechab and Baanah bring the head of Ishbosheth to King David.
From www.keyway.ca

(2 Samuel, Chapter 4) - Once again, I am simply astounded by the mentality of people living in the Bronze Age.  As a fan of archaeology, the glimpse of the mindset of these ancient peoples, as offered throughout the Old Testament, is a priceless treasure.  It's just unfortunate that people today STILL take this as a guide of moral truth.

In the aftermath of the fall of King Saul, much of the people comprising the House of Saul have fled or have been killed.  Ishbosheth was the king who was installed by the general from the House of Saul named Abner, to rule over lands still loyal to the House of Saul.  If you recall, Abner was assassinated in the previous chapter, and King David was angry about this assassination, cursing the assassins and their progeny to a life of poverty and leprosy.

This chapter has a similar story.  Two assassins, Rechab and Baanah, whom I believe used to be captains in Saul's army, assassinated the newly installed King Ishbosheth, in the hopes of getting in the good graces of King David.  They cut off the head of Ishbosheth and approached King David with the head. David was not happy with this assassination, and had his own men kill the two, and then cut off their hands and feet and hang them over a pool in Hebron.  He also had the head of Ishbosheth buried in a sepulcher there, as well.
Posted by Andy at 11:36 AM 0 comments